Sticks and String, a knitting retreat

Spent the entire weekend at a knitting retreat.

Completely immersed in crafting and meeeting other knitters who were churning along on their projects as well.

There were spinners there as well. 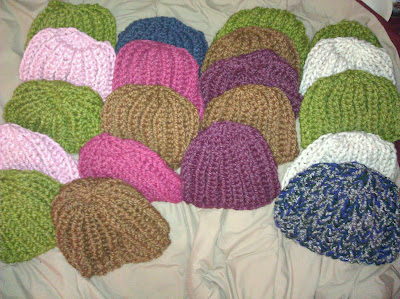 So, I vowed to make 100 hats for the homeless this year.

Its been a full month, and in order to meet my goal, The numbers tell me I need to make between 8 to 9 hats a month.

How many do I have done?

That means that I hit 33 percent of my goal in less than one-tenth the time I have given myself to do it.

I would almost question upping the goal number, but the truth is that I am highly unlikely to be able to sustain this effort. The main accomplishment was yesterday when I competed in a 24 hour hat challenge on www.ravelry.com. Everyone who competed had the same 24 hours in which to create as many hats as they could. I wasn't even close to the top competiter (whom I think completed 27 adult hats, I might be third on my own team, even). But I am still very pleased with my final count of 20 adult hats completed in 24 hours. And I am even more pleased that I did as much as I did, yet managed to not cause a flare-up of my carpel tunnel issues. And that's saying something. Lol