Project in the works

OK - so I'm still stalling on the sweater. And I've crocheted a baby blanket - pic to come... done while we still didn't know if it was going to be a boy/girl for a co-worker. (so it's orange).

I've got some blue yarn selected for a baby sweater -still digging through patterns for her (as yes, it's now known to be a boy).

So, I had to come up with something I could work on at work - as we sit together at lunch at least once a week to knit together. And I can't very well knit a gift for her in front of her and still surprise her!

AND... "a" decided he needed a blanket for himself. As he liked the baby blanket I had made. We talked and talked - and I wasn't able to convince him he wanted a green sweater (as I had already bought the yarn to make him a green sweater - sigh).

Nope - he wants a blue star wars blanket. And nothing else. sigh. But, I had something I wanted to. His eyes have been bothering him. I'm not really sure if it's itching or burning from possibly allergies (I have this, not impossible to believe he might as well)... or if actually it's related to the fact that he's having to deal with his vision issues more so than in the past now that he's really trying to learn his letters. I do know that they bother him more at night or morning - and that's kind of typical with his vision issues which do get worse when he's overly tired. So, I suspect the latter. About all he confesses is that "he can't see" and "my eyes hurt" and he closes his eyes. His "bad habit" is that he wants to lick his hand & wipe his eyes with his hands. NOT GOOD. So, my bargain is that he's to STOP doing this and he can wipe his eyes with a clean, wet washcloth or paper towel instead. It's a hard habit to break already, but I figure that it's going to take me months to knit up a blanket ... and if he sees me working on the blanket, I have a good reason to apply pressure to get him out of his bad habit.

So - stay tuned. I'm a knitting fiend and have several blocks completed already - will post pics shortly. In fact, I also have several graphics. I figure I'm going to write a series of posts as to how my idea evolved from my first plan - to finish product.
Posted by Penny at 1:31 PM No comments:

OK, I'm struggling with motivation on the sweater. I have a mistake that I've been trying to ignore for six rows, and every time I picked it up - the mistake would bug me. Keeping going hasn't helped. sigh. I have to undo back to the mistake and redo or it will drive me nuts. Normally, I'm not this much of a perfectionist, but since the more I do the more obvious the mistake becomes, and the more it's bugging me, I guess I better do the right thing or every time I wear it - the mistake will still bug me. But, it's just as slow (if not more so) to unkit each and every stitch as it was to knit it in the first place. If it wasn't the inexpensive yarn, I could probably just take the needles out and pull the yarn (very fast) to undo it. BUT, this yarn (guess I should call it cheap instead of inexpensive) doesn't take well to such harsh treatment. As such, I've set it aside for a while until I get "more motivated".

That said, I had two other projects that were virtually finished, but just needed a few minutes to call them done. They had sat for over six weeks for the one, and over three months for the other. The other night, I got a wild hair and finished them both in less than 30 minutes. Sigh... guess I had to be in the mood? All the first one needed was six buttons sewed on... and the other needed a couple pieces of velcro sewed on.

But at least they are done now.

Also finished (pics to come later) - a hat & scarf made with "won" yarn from a giveaway. These are going to be held onto until next fall and then given to a charity that provides these to the homeless. I've found a charity in Ohio -- but I may just try to find a local one instead. We'll see, got a few months before someone will want them. 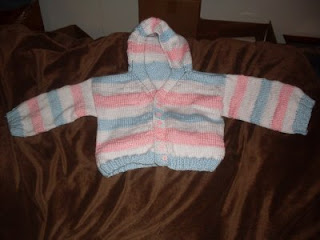 Next a doggy sweater (more feminine): 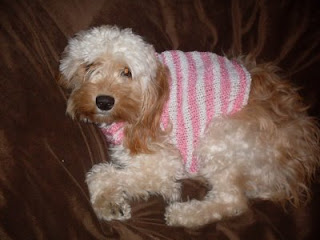