I've got four more swatches finished. A little ahead of schedule. 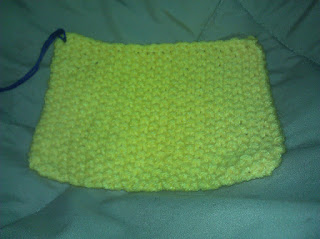 And here are three swatches that cover different types of increases: 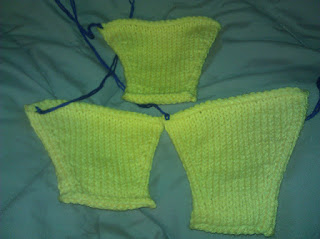 I'm really thrilled with my progress so far. I'm certain none of them are perfect and that they might ask me to redo some... but isn't that the point of the thing? To do your best, get feedback and find a way to improve?

Anyway. I'm going to take a little time this weekend to focus on answering the questions and starting the report so that I don't have all the written portion to do at the very end.
Posted by Penny at 3:23 PM No comments:

FINISHED (but with details):

Sweater # 5 of 12 -
Pattern: Crochet Bronze Beauty Top by Doris Chan
Yarn: KnitPicks Cotlin in StarryNight
Hook: I hook
Mods:
- I need to work on my foundation-less sc; so this one used a chain and regular sc as it was more even.
- I only did half-sleeves.
Comments:
- Super fast, super easy. Could adapt this pattern 'structure' to other crochet stitch patterns. Fits like a dream. Super soft cotton after washing (which you might want to do sans other clothing as it sheds the first time in the wash). This yarn was actually left-over from a project last summer and as such was a no-cost sweater for me. I threw it on over a t-shirt to dress it up for the office. 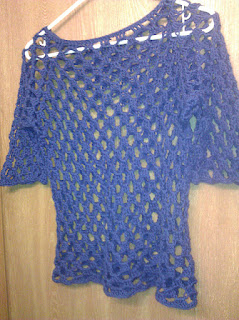 Also finished  two more charity hats - current total is 15 hats out of 40 (original goal for the year). This goal might climb as things go - just love the portability of hats and having them handy when I get stuck somewhere I can pick it up and put it down for a few minutes here and there.

ON THE NEEDLES:
STILL TO DO THIS MONTH:

I decided to attempt the masters knitting program last year. I was quite excited about it and ready and willing to learn new things. To take a critical look at my knitting and try to improve the quality. I had gotten quite FAST at knitting lots of things. I was learning a lot of new technicques and styles. But, I just felt there was an unevenness about my knitting that this program would help me with.

I planned on taking three months to knit all the swatches and prepare the documentation. It involves making several swatches that represent the best possible knitting you can do with several notes and or ideas of what to look for and what you want to try to correct.

I started working on my first swatch and even though I had been able to knit MORE evenly before? I suddenly couldn't. I had all the issues they talked about. And the more I did to try to correct them? The worse it got. I'd set it aside and work on something else. I'd pick it up and I would immediately get stressed out. (which is NOT the point of the program). I kid you not, I spent over 60 hours on that first stinking swatch.

It took me six weeks to do ONE swatch.

Enough was enough. I put it away in a bag and didn't look at it for AGES. Well, at least a year.

I started off working with wool since that's the recommended fiber for the program. Since I originally attempted this, I have since had my wool allergies worsen. I thought I'd be out of luck and wouldn't be able to complete the program... but then I dug a little deeper. Wool is only the recommended fiber (for pretty obvious reasons - it's very forgivable material AND it blocks like a dream). But if I improve my skills working with wool - while some of that will help me with working with the yarns I normally use - it won't all be something that would apply with acrylic or cotton. And sure enough - they totally accept acrylic or cotton submissions.

Using acrylic does mean that I'm going to have to REALLY work on my swatches because they won't block out as nicely as wool will and as such, they have to be darn good before blocking to get them to pass the program. BUT, everything I learn with working with them WILL apply to future knitting projects, and as such it really is a good use of my time.

My new plan was that when I got into the - it's only getting worse cycle - I would cut myself off. I would do the best swatch I can do within an 8 hour per swatch time limit. I'm going to still try to complete the program within three months because honestly? Without a deadline? It won't get done.

I picked up my first swatch and got started. I had to undo a couple of rows here and there - but within two hours I had a pretty good looking swatch. While I was at it - I knit up swatch number 2 - with a few less mistakes.

The next night swatch number 3 practically flew off of my needles.

Last night I completed swatches 4 & 5 in about three hours.

Seriously? Wow. What a difference it makes setting it aside for a year. I totally was stressing myself out over it last year - and that stress was bleeding into my knitting and making it uneven and awful. Now, I'm not saying the swatches are beautiful or that they won't need to be redone to correct mistakes. But they are SO MUCH better than what I was getting last year, it's not even funny. I wonder if it was partly that I read all that information about how to make things more even; and without stress incorporated them into my regular knitting? And now, it just comes so much more naturally? I don't know. I do know that I felt like I couldn't believe how awful my knitting was last year and this year I feel much more confident that I'm doing good work.

I don't have photos of all the swatches yet - but I'll post them a little as I work through it. I'll save the close-up glamour shots for during/after blocking. 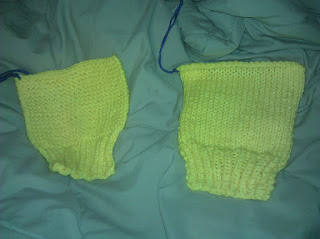 May Sweater finished - Sweater #6 for the year

This was made in CotLin a cotton/linen blend and PERFECT for summer! 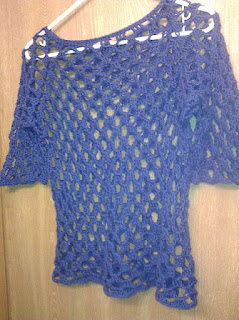 Arm/wrist is fully healed... so I am off and running with projects! First my Heavily cabled sweater was finished on the first. Here's a shot taken by my 8 yr old son (so pardon the pic): 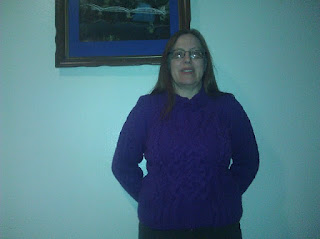 Here's a close up on the cabled center portion: 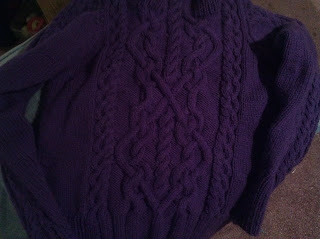 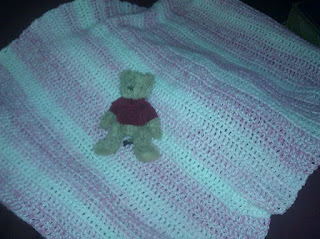 NEXT: Finish the Crochet Bronze Beauty top - free pattern from Lion's Brand Yarn. I'm doing mine in Navy KnitPicks CotLin yarn. Going quick and fits like a charm. Also in the works: Brioche Scarf done on 2-ply alpaca on BIG needles for lacy-effect. Pair of mini-socks done in Christmas colors & double-knit to test my theory that I can make a larger stocking with after-thought heel. Pair of adult socks for me - fairly simple pattern (tbd) to test out the Cotton sock yarn from KnitPicks to see if I can find a non-wool sock yarn. AND: I'm picking up and re-attempting the TKGA Master Knitters Level 1 program. Expect posts about it directly - should be (I hope) able to finish by End of July. I'm also picking up a top that's been frogged twice that's a Striped-T using Paton's Bamboo/Silk - I plan on starting this toward the end of May and finish by early July. Yes, indeedy - I am back! Now if I could just figure out how to do some glamour shots of myself... lol.
Posted by Penny at 8:44 AM No comments: