A year ago - January... I finished the first ever sweater for little "a". He LOVES it still (good thing). I made it a size larger intentionally - intending it for this winter, and it's still a little big on him. But, he's wearing it & it will probably still fit him next winter.

And, I decided I could handle a more complicated pattern, and started a "spring" short-sleeved v-neck pullover with cables - for me. I had the pattern, the yarn I'm using is Simply Soft from Caron... I managed to get the back done last year - and pick it up & put it back down again & again ever since. I had (notice, the word had) about eight inches along the bottom of the front finished. Wonder why I was working so slowly? I wasn't really happy with it. I had it almost half done & it wasn't quite working out for me. A couple of reasons - the bottom was always going to roll up. The finished pics in the pattern didn't show a roll, which meant that since I didn't like the roll, I was probably ALWAYS going to fight that "curling" along the bottom. Secondly, it so was not going to fit me. My knitting was to gauge, and I'd picked the size I wanted... when I took the measuring tape to one piece, it seemed to come out right, but when you held the two pieces together? Enormous... and unfortunately, traditional knitting requires that you knit the sweater in separate pieces, which means, that often, you won't know how well it's really going to fit until it's done.

I also messed up the cables pretty well, at the top & bottom - the cables switch directions every two cables - in the middle part, every other cable switches direction. I switched directions pretty randomly & it looked ok, but as I was getting better at following directions for the front, the front wasn't going to match the back anymore. I told myself to ignore it, who cares if I mess up the back, not like I'll see it that often. I messed up a little on the front, but wasn't going to undo several hours of knitting to fix one little mistake.

Wasn't - being the key word. I just couldn't see investing 30 to 40 more hours of knitting time for a "mess" - which is exactly what the sweater would end up being. Who spends that kind of time for something that won't fit properly? I sure was going to. But, last night I decided enough was enough. I RIPPED it ALL OUT. ALL of it, even the back - which was finished. I'm starting over, this time - I'm altering the pattern.

I started with a rib knit around the bottom edge (so it won't roll) - I'll probably cap off the sleeves the same way. Second, I'm making it smaller (although - tonight is the test - I have 1/2 inch done - If it's too big, I'm ripping it out again, and making it smaller yet). And, third? So, I can try it on - I'm knitting it all in one piece... knitting in the round is SO the way to knit clothes. So, I now have a half inch done on a sweater that I might actually wear someday. :-)

I wanted to make a couple of hats for infants for the Knit One, Save One Campaign.

Since my yarn budget is non-existent... I started with scraps of yarn.

The first one is from a child's pattern book - modified, as for some reason, following a pattern verbatim is harder for me lately. I made it smaller intentionally - however, as you can see by my pointer finger? This is TOO small. It fits a small teddy-bear though... so "a" has adopted it for his "puppets". The pattern called for a blue brim, red & white stripes to a point. I wanted more blue in it - so when I went to the stripes, I alternated red, white & blue (can you see where I forgot the blue stripe?). Knitting in the round, there's a nice benefit with this many stripes of not having to work in ends every color-change. I thought it was cute. Too small, but cute. 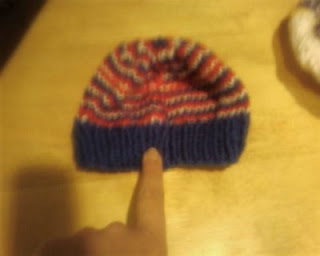 The next two fit the size that I was shooting for...

But, again, I had to experiment. This time, still working with scraps. I mixed it up a bit. I used two strands of yarn at a time and intentionally ended one of the colors & starting a new color on only one strand at a time. This are a little "thick" - but I justify it by telling people that they're really warm hats. That's important right? LOL But, I thought it was so fun how the colors change. What do you think? An experiment with socks

So, I made two mis-matched tiny baby socks to learn how to knit two-at-a-time. I LOVE the method. I bought some very expensive (for me) sock yarn that was in the perfect color for me (as I wanted something subtle & dark for wearing with my slacks to work). I bought high-end as I was hoping the finer wool & mohair wouldn't itch. And because I knew I wasn't sure how tall I wanted them to be (definitely on the short side)... I wanted to knit them toe-up. But, I could not find any toe-up two-at-a-time patterns.

I did find a wonderful site that had an awesome flexible toe-up design that could be done one-at-a-time. And, I simply adapted it to the two-at-a-time system thanks to Melissa of Two-at-a-time Socks fame. I used the Midnight stitch pattern for the "style" & look from her book as well.

I also manipulated it a little - to add ribbing to the under-side of the socks where the instep is. I love how this "snugs" up the sock. I love making them toe-up so I was able to try them on as I knit them. In fact, in my first attempt at about the half inch done mark, I tried them on, realized that I was making them too big, and ripped them back a quarter inch & was able to re-work it without too much pain. From then on, I kept trying them on. And I have to say - they fit really, really, REALLY well.

But, for two things. One - The cast off at the top of the cuff? It's tight. I did all the things I knew to do to make a looser cast-off including casting off in-pattern, using a larger needle, and hanging onto the second stitch after you pass the first worked stitch over it on the first needle. And, it's still too tight. Not so tight you can't wear them. Not so tight that you can feel it while you're wearing them. But, tight enough that stretching the cuff to pull the sock on over your heel? That's wear it's too tight. But, I could live with that issue. The second issue? The fact that within five minutes of wearing them I want to scratch until I bleed? That I just can't quite deal with. I should have made them with inexpensive cotton yarn.

That's what I get for trying to be a yarn snob. I love the look & the "knit-ability" of fine wool. But, I just can't wear it. When I started the socks I was actually a bit worried about how well I could tolerate knitting with it. And, it was so soft & lovely to knit with, I was so sure that the fine wool & mohair blend was worth the money as it didn't seem like it would bother me. Alas. It does.

So, I spent probably a good 60 hours of knitting time and over $20 making the most amazing & best-fitting socks I have ever owned. And I can't wear them. sigh. I would go so far as donating them to someone who would like them - but I'm too ashamed of the tight cast-off -- so they aren't good enough for anyone else either. Terrible, huh? Anyway - here are the "poor" pics (as my brand-new awesome Christmas gift camera died within two days of getting pulled out from under the tree. Am still waiting on my refund from Amazon to go out & buy a replacement. So, you're stuck with lousy cell phone pics. 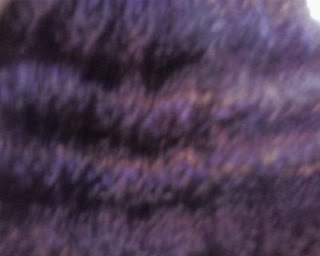 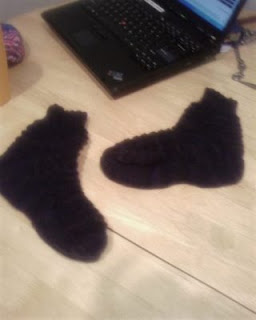