So, from the knitting impaired - so far, I have ONE hat out of the hopefull three I was shooting for: 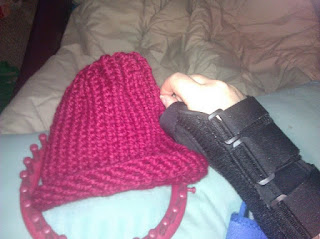 This was done with a simple e loop - which was the only stitch (besides e loop ribbing done on a long loom BUT knit flat). So, it's a twisted stitch stockinette hat.

I'm also working on the baby blanket that is more than half done... also picked up a book for more 'loom' stitches... which taught me a lot. I'm looking forward to trying something a little more involved.

I'm hoping some dedicated time will get the baby blanket finished by Saturday - it's ribbing, but still done with e loops - so still twisted. I did a panel half pink and tried-to-be-half variegated, but the length of the skein was shorter on the variagated. I'm starting the second panel with variagated; and will add from a third skein to try to get it as long as the pink square on the first panel. If when I'm done, my goal is to have two blocks of pink catty-corner to two blocks of variagated. If need be, I can undo the cast off on the first panel and add more length to it. We'll see... definitely an iffy project.

BUT - good news is that the doctor declares that I should be good as new in two to four weeks. So, I'll spend the time working on a project for me using some of the new stitches I've learned - to be determined yet. And can't wait to start truly knitting again!

And it's just in time too, I have a new knitting class starting up middle of April!
Posted by Penny at 7:25 AM No comments:

Still quite upset with myself

I did manage to pick up the needles enough last week to prove to myself that my hybrid cottage industry style/continental style could work even with a broken right arm... exceptionally slow. But enough for the demonstrations I needed to do to teach Thursday night.

Not fast enough to even bother trying to make something. However! The knitting loom? I can totally do that left-handed. And my right arm just acts like a dumb weight on the loom.

New March plans are to make 3 hats and a baby blanket on the loom. Wish me luck, because most of my free time right now is more focused on sleeping than anything else.
Posted by Penny at 6:54 AM No comments:

Make a new sweater from scratch - from some sort of pattern, from some sort of yarn. Originally had planned an Alpaca long-sleeved sweater 'Ramona'. But a) I'm not sure the yarn is right for it and b) I don't think I want to finish a long sleeved sweater in Alpaca by the end of March (too hot to wear). So, then I was looking at a short sleeved cardigan in a different Alpaca yarn. But my allergies are kicking up, and I'm not sure I want to expose myself too much to Alpaca right now when I have experienced some 'slight' itching to it in the past. My wool allergy used to be slight itching, to major itching has now turned into Hives. So, I'm thinking non-animal fiber right now.

So, still looking at my stash and my queue of patterns I want to make. Haven't made a decision yet.

I would like to make 10 charity hats (since I didn't finish that many last month).
I want to crochet a 2 hour baby blanket.
A 12"x12" block for another baby blanket.
Finish my Kingdom Gloves I started last month.
Posted by Penny at 9:02 AM No comments: