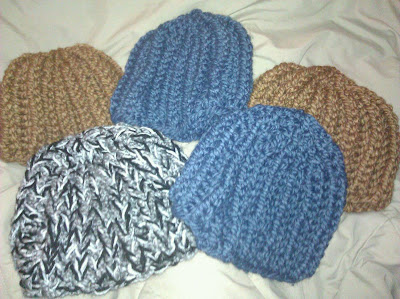 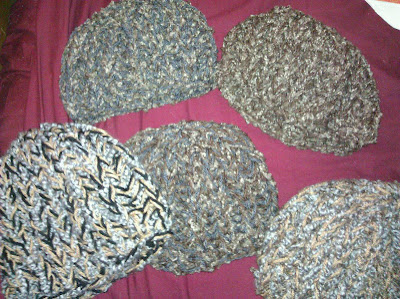 I contacted a homeless shelter arouund the end of November this year and asked if there was anything I could provide to help make Christmas a little more special.

They asked for some bathrobes and bath soap... easy.

I mentioned being a knitter, and having a handful of hats ready made and that if they were interested, that I could make a few more. They were more than a little interested, they were happy to hear it and said that they would be happy with any hats I could donate. I pulled out the six I had finished during a challenge this laast summer, and figured that I could probably make another five or six hats in the ten days left before I dropped the donation off.

And off I charged, making hats. I ended up making a total of 12 new hats. They house 34 women at any given time... so while I was thrilled with actually dropping off 18 hats, I was a little sad that it wasn't enough to provide each person a hat.

In the meantime, I found out that my boss's church drops off hats for the homeless by going directly to the camps and bridges where they actually stay. So a few more hats were knit to add to their supply.

Got me thinking, this did.

I will admit that after making 12 hats in ten days... then a handful more... I wasn't interested in knitting hats every single day... but I was enjoying the process. Armed with a pattern that doesn't get old, bulky yarn and big needles that work fast... I could probably knit enough hats this year to give a ton to the homeless... 40 for the shelter, and 20 for the camps and bridges.

60 hats, well that's only 5 a month. I can totally do that before December next year.

It's between terms at my knitting role playing game, so I have to wait to work on most of my other projects. So, what the heck, I've got nothing better to do... I'll make my first five hats now (this was before Christmas). Umm.... I now have hat number 11 on the needles. Huh. It is still three more days before the game starts again.... huh.

Five hats a month isn't going to be enough. I am now shooting for 100 hats total... eight or nine a month will be a little more challenging than five. And its a nice round number. Besides being already at 10% only a few weeks after making the challenge to myself? Well, I am all set to go now.

I figured I could raise this blog from the ashes and use it to chronicle the process, post photos, etc.

Note that some of the colors (one might call ugly) were specifically chosen for the camps. They chose to wear colors that will help camoflague them. Bright colors will be better received at the shelters.
Published with Blogger-droid v1.6.5
Posted by Penny at 9:35 AM No comments: