The first six are the same old, basic watch caps I always make.  These are headed for the woman's homeless shelter. 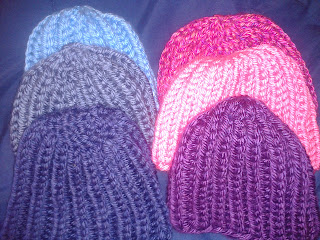 But the seventh one was a little more out-of-the-box. This one is baby-sized. We'll take it to the library this fall when they start collecting hats & mittens for the holidays. 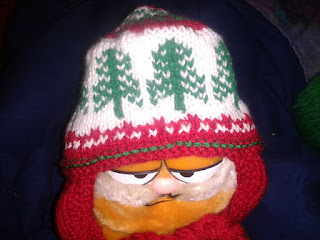 2) Seven washcloths for Ravellenics - DONE! Though, I had just enough yarn left to make two extra. So I ended up with nine, total. 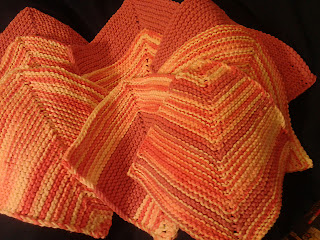 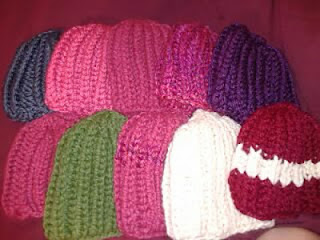 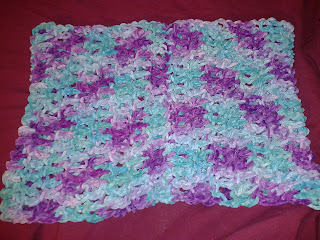 (I love the different pooling)

4) Get darn close to finishing the cabled & dropped stitch cardigan as I can.  -- Ready to pick this up and start working on it tomorrow. I should have plenty of time to get it to the 'almost done' stage. My goal would be to finish it officially on Sept 1st.
Posted by Penny at 8:36 PM No comments:

3) As many additional charity hats as I can complete before the end of the Ravellenics games.

4) Get darn close to finishing the cabled & dropped stitch cardigan as I can.
Posted by Penny at 10:54 AM No comments:

Well, the last couple of weeks were a complete bust as far as knitting went. I landed myself in the emergency room a couple of times and then surgery. But, am back on my feet and knitting again (finally) in August. Figured I'd clear the slate for what I did (and didn't do) last month before posting my plan for this month.

TKGA Master Knitter Level 1 - Swatches finished. But did not even get the hat started. I was working on my guage swatch when I got ill and pulled it out... will probably wait until September to tackle the hat again.

So, considering the last ten days or so of the month was spent ill, I think I did a-ok.