A few of my finished items from May...

These are my son's socks - little a... he's getting big enough that these take a little longer, his feet are now officially bigger than mine (and he doesn't turn 12 until next month).

These were made with variegated blue worsted weight acryclic - so more like slipper socks than socks, but he loves them and he's outgrowing the others... I might make him another pair in July. No pattern, just cast on x number of stitches, knit in ribbing for an inch or so, then heel flap and then off I'm running. The Handbrake Cowl is a for-pay pattern on Ravelry, But a dear friend bought it for me as a gift as the proceeds from the sale of it go to a great cause and it's really not that expensive.  The yarn I used ended up coming out far more camoflaguing in color than it did... which surprised me as the yarn in skein didn't look like camo-colors, just shades of green... AND GO FIGURE, when I've tried to get camo-like look... it doesn't work... but knit with hand painted green yarn and ... blam... camo!

The yarn is Pomaire Multy  which is sadly discontinued. It was a bit splitty, but a REALLY nice cotton yarn and it's so hard to find good color options in non-wool items... the yarn was also a gift (another time) from the exact same person, so when I got the urge to work the cowl... I figured I totally needed to use some of the yarns she has given me over the years.

I'm just not so sure that I'm a green fan, and it came out a bit 'boyish' with the camo appearance... but it's a longer cowl - which none of the men in my life would wear a long cowl as that's too 'girlish' for them. So, we'll donate it to charity... I might make another in the future as it was very enjoyable to knit. 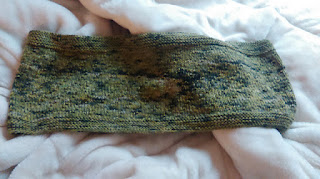 These four 'odd ball' squares are for some photography I'm requesting - there's a stockinette square, a garter stitch square, some cables & lace and ... the handbrake cowl purl diaganol in the last one. The photographer has a macro lens and will do some close up pictures for me. I want to frame them for my walls. 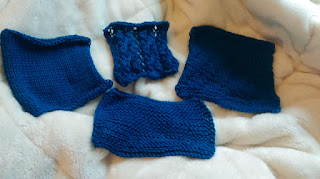 And then a few of my charity hats for May... I started playing with holding yarn double and using up some scraps to try to do some gradiants... so far its been fun, quick and interesting... so definitely a good use of some scraps! No pattern, just cast on 60 stitches with yarn held double- knit ribbing for a few inches, then stockinette then sort out some decreases.... use the yarn ball until the color runs out or you're desparate for a change... I'll definitely be doing more of these next month. 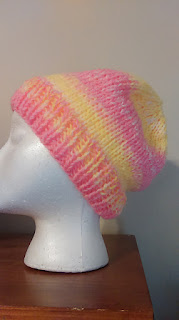 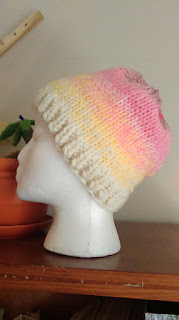 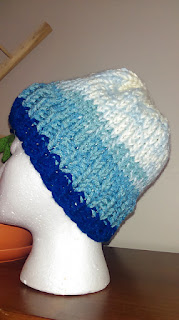