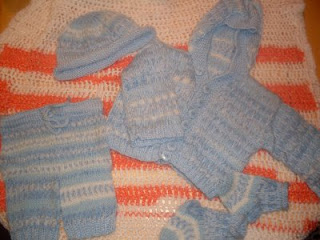 Finally some knitting to show.

These were gifted at the baby shower for my co-worker.

First was a crocheted blanket made pre-sex id'd... and I used this as my "tissue" in the gift bag to wrap the other gifts. 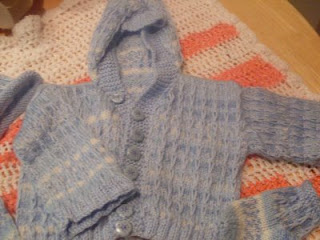 Then for the baby sweater. I had bought the self-striping blue & white yarn with matching blue yarn for a project specifically for this baby. But could not decide on a pattern... or how I was going to do it. I was about to give up and simply do stripes of blue with the self-striping blue with the same hoodie sweater pattern I had made previously in pink/white/blue stripes. .... when I had a 'brainstorm' -- I was watching a knitting show on tv and decided I wanted to "frame" boxes of the colors within the other plain color -- and found a pattern to adapt ... and used that to adjust the hoodie sweater pattern. I liked it while I was doing it, although in the back of my mind I kept thinking that I would probably have preferred it if the "frame" was a contrasting color instead of a coordinating color - to make the color pop. If I had ONLY known how beautiful the self-striping was on its own... I would have simply used the self-striping yarn in a simple stitch for the whole sweater. 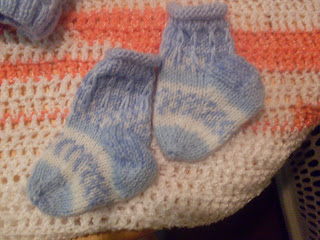 I'd already finished the sweater - before I started the booties. AND it was the booties where the heel and foot was made entirely with the self-striping yarn... and I almost wanted to undo the sweater and start it over. The yarn really pops on it's own, and the complicated stitch pattern I used for the sweater didn't really show it off to it's full potential. 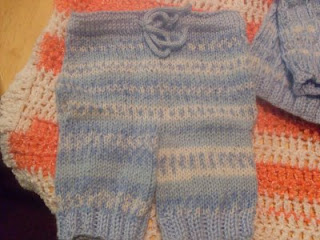 But, after the booties, I still had almost a full skein of the self-striping yarn left, and a half-skein of the coordinating blue... so I had to make more... so, along came the hat... and then I had to think for a bit, and found an awesome pants pattern. I didn't like the self-striping quite as well in the pants. And it's a bit much with the sweater - almost like they shouldn't be worn together. If I had to do it over again, I would have NOT used the blue to try to do the complicated stitch pattern on the sweater - which would have saved me enough of the coordinating blue color to have done simple blue pants.

I've been knitting away...

but not posting about it - sorry.

I'm 90% finished with a very special blanket I'm making for my son... and have about a half-dozen posts semi-prepared for posting about it... so that I can share my inspiration, my mistakes, and my patterns (the couple I made up from scratch)... so - you just have to wait a bit longer.

However, I have reached a point in the process where I have to make a final decision about something. The back of the blanket is not going to look pretty. There will be a very definite "right" side to it. I've put in probably over 20 extra hours being extra careful to weave in ends "just-so" and without making it too much of a mess.

AND? I'm thinking I want to put a back on the blanket. (which means I could have tied knots in the yarn & cut it off without all that extra work) sigh

BUT, honestly? Has anyone ever seen a blanket (knit or crochet) that was backed with fabric? I'm thinking a nice super-soft fleece on the back would make it 1) warmer 2) more cuddly and 3) more likely to get used longer.

I'm thinking I'd treat it a bit like a quilt and tie the front & back together with yarn... of course, I'd have to baste all the way around the edges... I would love some feedback - is it too weird? too impractical?
Posted by Penny at 11:51 AM No comments: