Almost all of the rest of the gifts 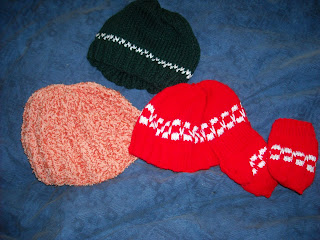 OK, so I have one more hat I'd like to do - for my nephew I won't see until the 10th... although, in all honesty - the red hat was intended for him, only I was wanting to see what that pattern would do with mittens - aren't they cute??? and - oops, the mittens are too small. So, instead, those will go to the now one-month old grand-niece for next winter (since they'll be too small for everyone else). sigh.

The green is from the same skein as "a"s gift; the red is from left-over pound of red yarn (Super Saver) I bought two years ago and made a sweater for "a" last year. The orange is a plush super-soft boucle that was on sale for 99 cents a couple of summers ago... only enough to make one hat, but perfect for my little grand-niece.
Posted by Penny at 9:59 AM 2 comments:

My little guy posing with his home-made gifts from me for Christmas. ... Can you tell how exhausting a job modeling is?

The green yarn is from a 25 cent skein bought at Goodwill. Used the pattern for the hat (with a little customizing) from a baby pattern I bought at Walmart YEARS ago. Yes, he's five; and yes, the hat fits... I did customize it after all. It's acrylic yarn that can be a little itchy; but it's nice & warm and very durable as well as washable & dryable... important for kids items. The white is left-over from a pound of yarn I bought from Ebay - it's from Caron, yarn ends (not correct-weight for sale through traditional methods; bundled up & sold in bulk) - the pound of yarn was about $5.50 including postage; I barely used any for this. 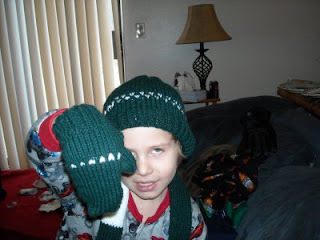 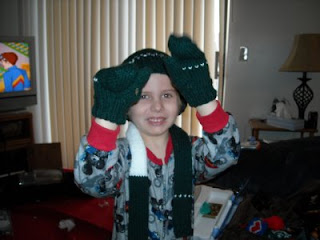 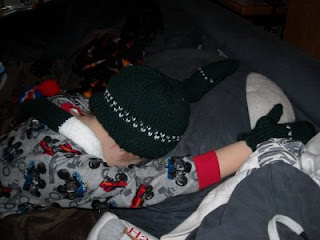 I used a free pattern for simple mittens online at Knitting Pattern Central; always my first stop for looking for patterns... only I adapted them & used the 2-at-a-time Sock method from Melissa's book. Gotta love doing 2-at-a-time. If I could manage it; I'd do a dozen at a time. It really isn't any faster; after all a stitch is still a stitch; but if you didn't have to work from start to finish on one just to do it all over again on a second? It's a GODSEND, seriously!

Then, the scarf. Well, not exactly. I loved how the yarn was working up; and at this point I hadn't thought to do a scarf; after all "a" had a scarf made for him last year... so instead I made up a second hat in the same yarn for a nephew.

Then, I realized that I really did want to make a "matching set". silly me. So, being as I decided I wanted a matching set; and being that if you knit a scarf from one end to the other; and being that the hat & mittens feature a "v" in contrasting color - in the scarf, knit traditionally - one side would have "v" and the other would have an upside-down "v". So, being still quite silly; I decide to work both ends at the same time and work my way toward the middle; I could call it similar to the 2-at-a-time method; but it's just barely similar. Actually, all told? it's probably a good way to learn the 2-at-a-time method since it's very simple in comparison, but takes the work a row on one item; work a row on the other item; turn the needles, repeat. And, the original plan was that when the two halves were long enough, I'd simply graft them together in the middle (a way of "joining" that looks just like another row of stitches).

Only, of course, being thrift-shop yarn that was probably originally sold in a store some 30-odd years ago - it was the only skein I had; and I had been silly enough to go and knit a hat for my nephew. As if he needs a hat in this soft, thick & warm (albeit cheap) yarn. I ran out of yarn about eight inches short of my goal. Go figure.

Would you believe I ALMOST went to the effort of ripping out a fully-completed, perfectly good, Christmas-Gift-intended.... hat so that I could use the yarn for the scarf? I did. I thought about it for a good two hours.

Instead... I decided that "a" would not care one little bit if his scarf had a different color in the middle. And, honestly? It's a good thing it's in the middle. I know it looks a little "off" - but it's warm & cushy & at least I still had more than enough of the white left-over. Actually - all of the white is left-over small balls of yarn that I'd used for one project or another, and had about 100 yards or so left, so they were in a basket with other yarn scraps... ready for "accent color".

So what if there's white in the middle? I could always claim I did it on purpose, that it's part of the character of the item.... lol. Good thing I'm not a type-A personality. I'd have been up all night knitting another hat, scarf & mittens that did match from another skein.
Posted by Penny at 8:46 AM 1 comment:

So, went on to make a winter scarf for my sister - same type of yarn as the shawl for her daughter, different color: 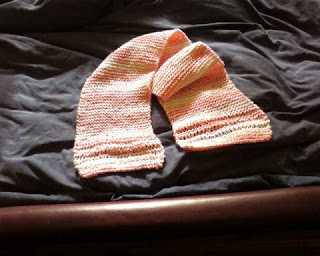 And, the more I thought about it, the more I hated the shawl I had done. So I ripped it out with the intention of re-knitting it into a "lazy lace" rectangular shawl. Lazy lace is knitting with over-sized needles to make it look like lace; when it isn't. But, it is fast - so I would have time to finish it before Wednesday (when my sister drives to see her daughter for the holidays -- and I call that, free shipping).

But, I still hated it. Even more... so I pulled out some other yarn from my stash & lazy-lace knit this one instead. 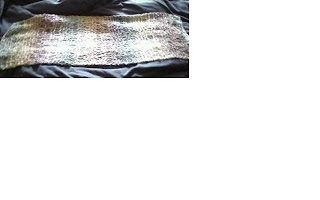 It's a little hard to see the colors - but they are a 'heather-ish" rainbow boucle... I think she'll like it a lot.
Posted by Penny at 11:34 AM No comments:

Struggled... what to make for new mom in warm weather... when I have existing yarn, needles, time & no money?

Per her mom's suggestion, I settled on a shawl to keep her shoulders warm while she's nursing the new baby. I was going to make a standard triangle shawl without any lace "detailing" (for speed). I loved the way the purple & white self-striping turned out for the scarf, hat & mittens I made; and I had other colors... so settled on orange & white. I do like how it turned out (sort-of). But have to admit, orange is not my color of choice... the yarn was on discount, and it's super soft... so if orange-y sherbet-y color is something you like (?)... it turned out ok.

I didn't stick with the triangle shape in the end... as I double-stranded it to make it nice & warm... and it got too big for my knitting needles. I started at the back point & just kept increasing stitches. When I reached the point of too many stitches, I altered the pattern. I ended up doing short-rows & worked one side at a time... and then (don't ask me why, it was close to midnight & I was doing weird stuff)... I ended up (after increasing for another ten rows) - started decreasing, to a triangle point on each end. So, the shape? Well, hard to describe really. Photos are a must. Notice that the stripes change direction by the time you drape over your shoulders. So, only pictures on a person will work to show it off. 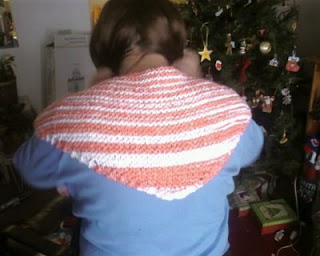 See? Started from the bottom up in the back - here it still looks like a triangle. 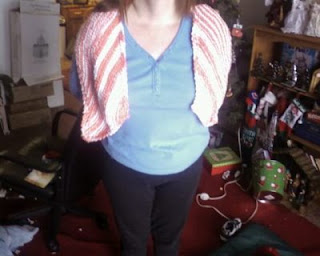 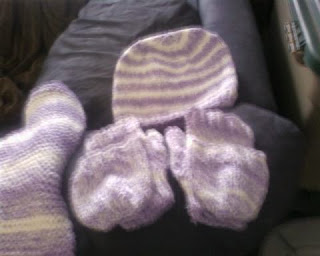 We found a young mother via the Angel tree opportunities at a nearby hospital. Her wish was for a winter hat & gloves. I've made a matching set with winter scarf... they are nice & warm... not terribly sure how long-enduring they are... (eek); nor if they will fit. The mittens fit me, so it's a guess if they'll fit her as well... they do have some stretch, so I'm hoping. 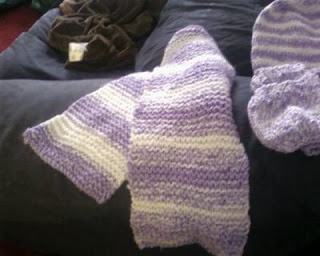 The mittens are "convertable" - either gloves or mittens... I was just curious if I could do them. So, had to try. I had a few bad starts on the mittens, but I think they turned out just fine. I adapted the two-at-a-time sock method up until I hit the fingers. It worked out great. I did the fingers & the thumbs with double-points. And then I needed to do the "cup" that covers the fingers when you're in mitten mode... and although I should have been able to go back to the two-at-a-time method to join them back together & finish them, I struggled with figuring it out; caved and just finished them with the double-points. 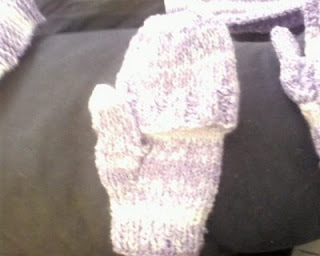 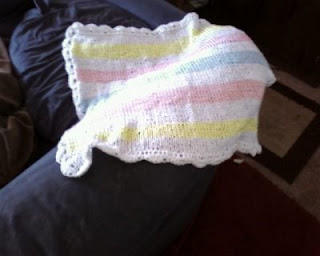 Little Chloe was born three weeks ago and is living with her parents, a brother, and a sister in Texas. Didn't want to make uber-warm items for her (like stocking hat & mittens; although those might come in handy someday). Nor did I think she would appreciate the hooded towels I'm making for her brother & sister. So, instead I whipped up a baby blanket. This one turned out much better than my first trial. First, I knitted everything except the border (I knit better than I crochet). So, it's at least a rectangle (lol)! And then I crocheted on some trim, to "pretty it up". I also found some perfect white that is super-uber-duber soft; which matches the extremely soft color yarn. It's machine washable & dryable; and so soft, it's almost silky.
Posted by Penny at 10:48 AM No comments:

Using up more of my almost-free yarn (bought for about 25 cents a skein)....

I knitted up a Scarf & Winter hat in green for some young woman. I love this minty-green color. The scarf curls up a little, which is kind of a bummer, as I specifically stitched the edges to try to prevent curling. 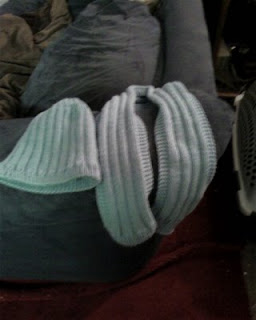 and a Winter hat & mittens for some young child (guess it could be boy or girl). Sorry for the awful quality of picture, but alas, I'm still taking all my pictures with my camera phone (which isn't the best quality). And it took me almost ten minutes just to get these pictures taken... between "a" climbing up & piling on with Kyra & trying to get in the way... I gave up & figured this was close-enough ... lol. (Notice the cord for the mittens? to run through the coat so you don't lose the mittens? That's EXACTLY what all of my mittens had until I was probably seven or eight. My aunt made mittens for over 30 kinds every year & all the young ones got cords so we couldn't lose them!!!). 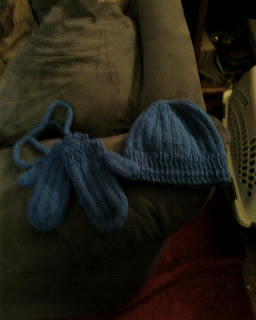