Get to 50% done on Cabled Gloves - about 30% - so a little behind, but am hoping to have finished by third week of March, so we're still in the game


12 jellyfish hats (< 2 hours each) - 3 done of the 12, no new progress to report, if I can get my project bag finished by tomorrow night, I'll come back and work on these again.

Felted Knitted project bag - about 75% done - have one more panel to go, then seaming, then picking up and knitting the top border and handles.


Decided to do a second cowl instead - love, love, love how quick these work up. done


little Gnome House for my son's stuffie done
Posted by Penny at 11:15 AM No comments: 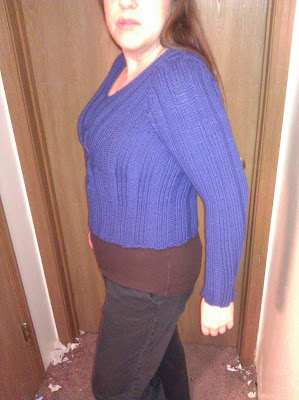 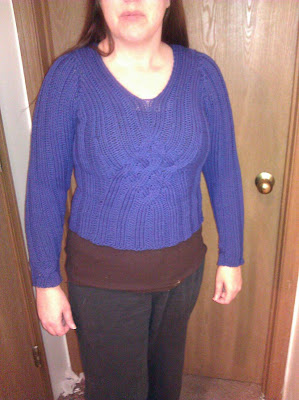 I promised some photos...

First - here's the bottom of the sleeve (not a great shot, but eh - camera phone on lap while performing surgery - good enough): 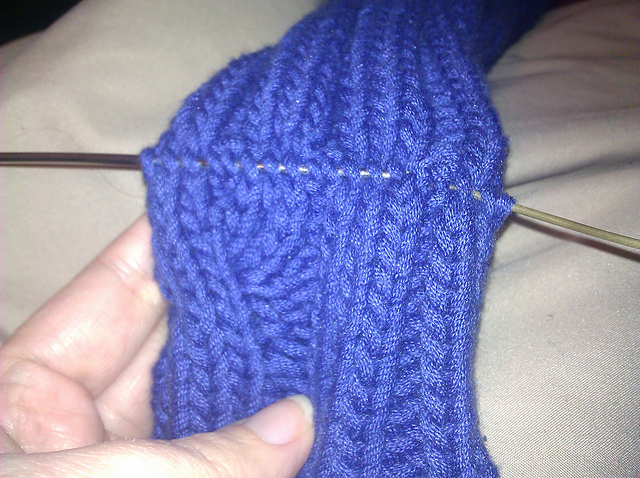 The little bit of twist you see at the left edge? That's the cable where it is now. It's supposed to be on the two sections of ribbing on the right edge.

I've inserted a cable needle into the stitches I want to save ABOVE the increase/decrease/cabling section I'm going to redo. 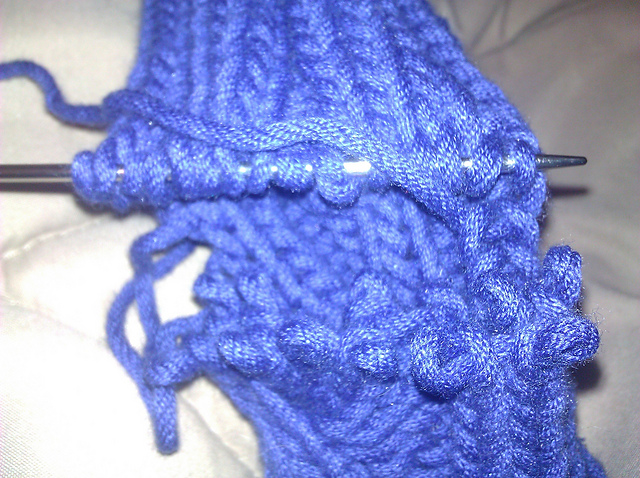 Here I've snipped a thread in the middle and started to unravel a single row going both left & right - the snipped ends won't get reknit - instead I'll leave them at the edges of the surgery and weave them in after I finish. 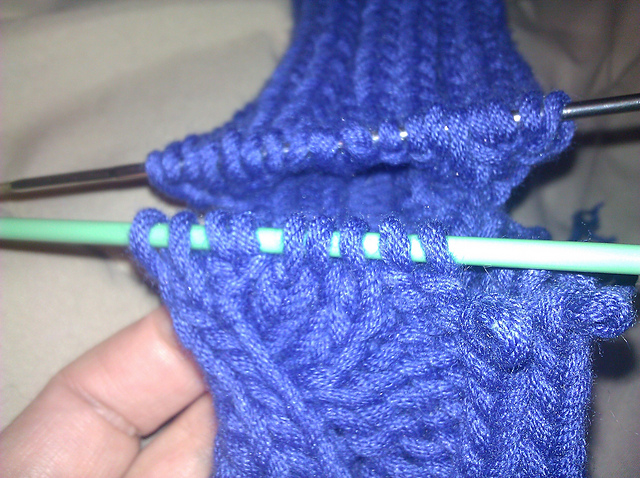 Here I've picked up the stitches above the currently cabled section and placed them on a double point needle to deal with later. 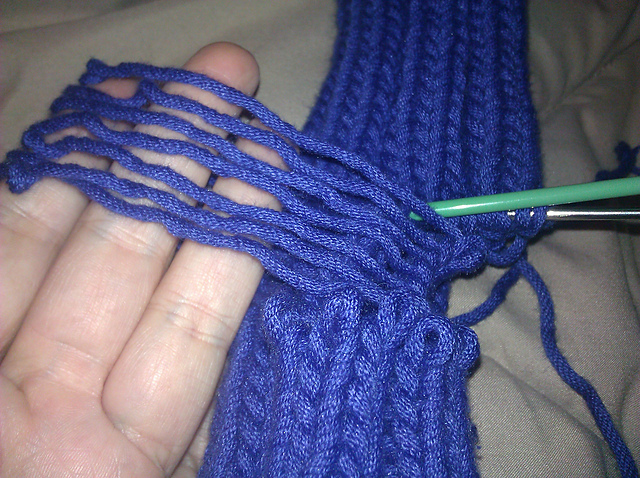 Next, I dropped down several rows (one for each 'ladder' of yarn you see here) for the not cabled section that I wanted to repair first. 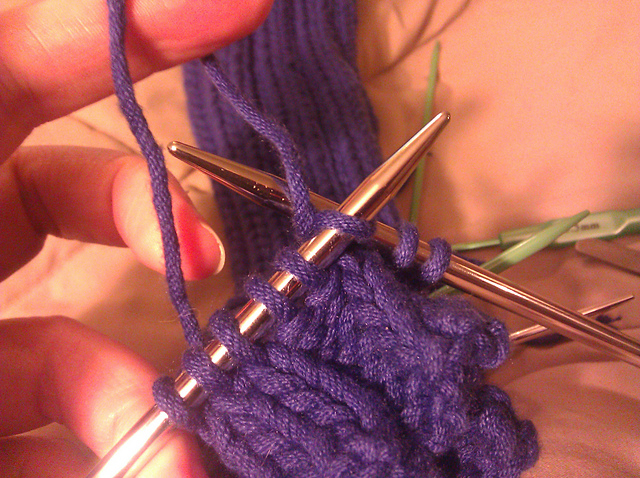 Then I took each ladder - bottom rung first - and knit with that yarn the section that needed to be cabled. 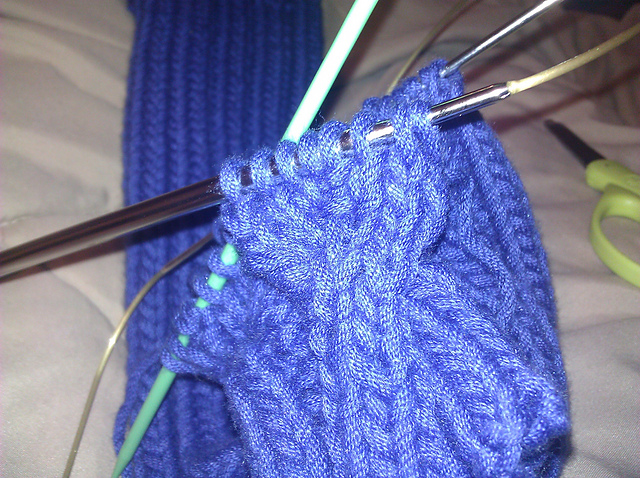 Here it is with the right side cabled. I repeated that process for the left side to remove the cabling. 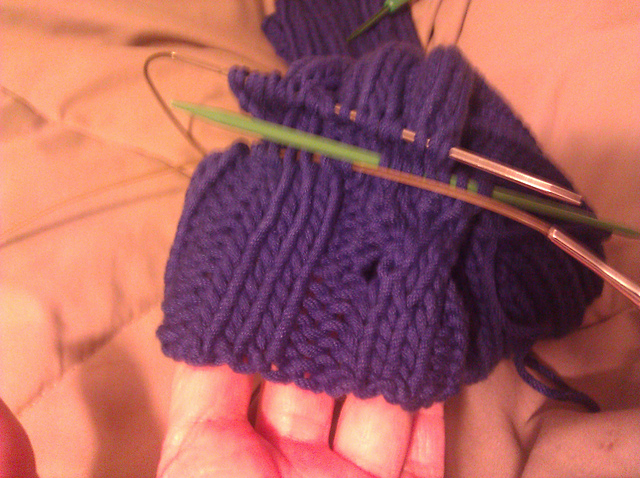 The last row to work is the row that I snipped & unraveled. At this point, I picked up new yarn from the yarn left over from working the sweater and I used a yarn needle to start grafting. 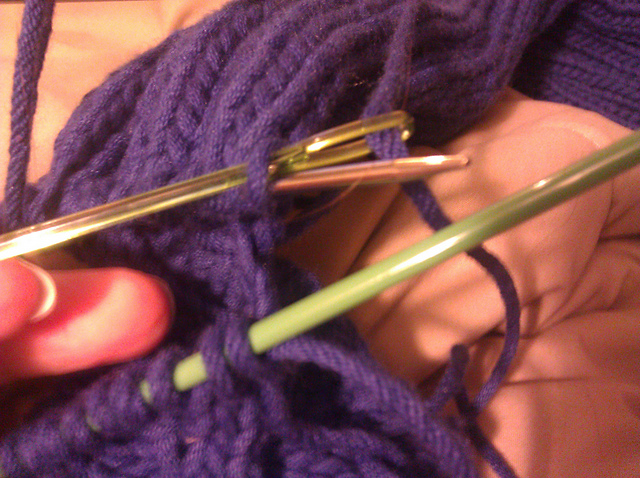 It's K3P2 ribbing - so I needed a little guidance - found my old link to a tutorial that works out pretty well. 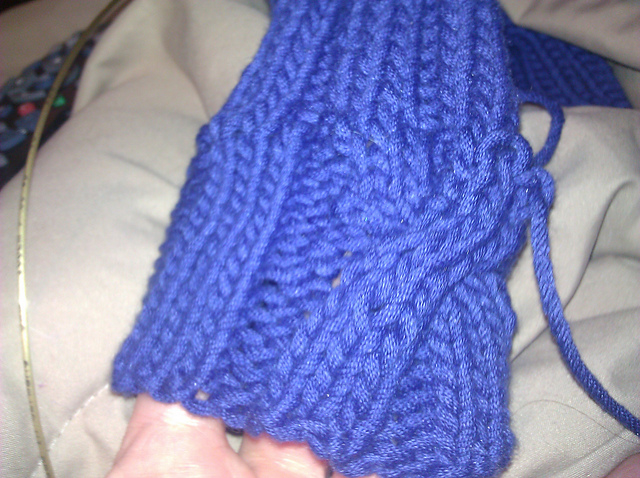 It's not 'prefect as there's an occasional loop going the wrong way on a knit stitch. AND I focused so much on not making my grafting too small (which is my norm) that some of the stitches came out a little larger than I had hoped. But with a little blocking and creative weaving in of ends there will only be the slightest of scarring.

I have already picked out and redone the shoulder seams and seamed the left sleeve onto the correct side of the sweater. So, all that's left now is to seam the right sleeve and block it. It was getting late last night or I might have thought about pushing through to finish it then. But hopefully by the end of tonight - I will have sweater three of twelve finished.
Posted by Penny at 6:38 AM No comments:

I was so sure that I would be posting a Finished Sweater this week.... not so, I have some repairs to make.

I might even have to do a little surgery to fix it. Expect a photo-heavy post(s) next week and I'll try to show the issues and the fixes.
Posted by Penny at 1:53 PM No comments:

Half-way done with the Cabled Sweater

Want to finish by March - so this is good, steady progress and puts me right on time to finish when I want. Of course, it'll be sad to finish this just as spring hits and I'll have less occasion to wear it. But such is the curse of the person who knits the current season instead of planning ahead better. :-)

I'm hoping to have Lia sweater finished before the end of the week.
Posted by Penny at 8:19 AM No comments:

Heavily Cabled sweater is about 40% complete:
I've finished both sleeves and have knit the body in the round for about 6 1/2 inches: 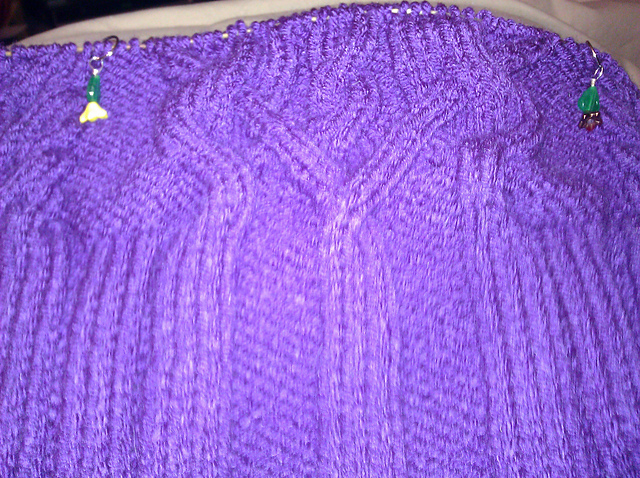 It takes me about 15 minutes for every two rows (cabling only on odd rows). I've had a couple of mistakes where I either tinked back a few stitches or where I dropped stitches down on the next row and reknit a small section. But none of the mistakes have been big... mostly just losing track of which row I was on. And all easily fixed. Have to say it's been an extremely enjoyable knit and not nearly as stressful as I thought it might be. 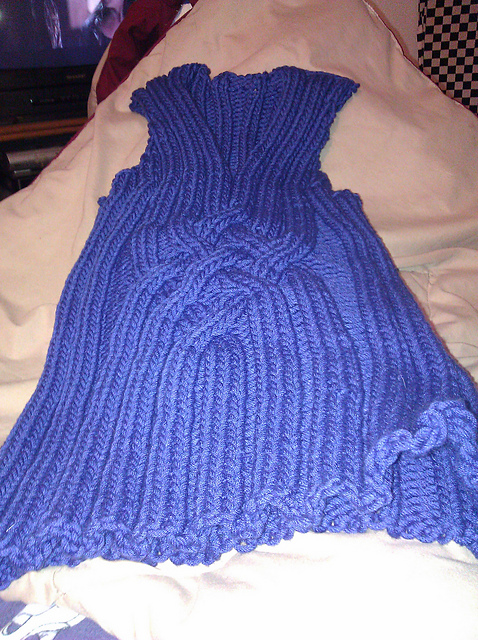 As promised by the designer, this is a super-fast knit. Using bulky yarn and size 9 needles. It doesn't look like it will fit in this shot - because the ribs pull in so tight, but it fits my size 12 body quite well with some negative ease. I have to admit to having gotten nervous quite a bit of the time during the knitting thinking this will never fit. So last night, after I seamed the shoulders I put it on, one more time, for the final check. Sure enough, it's got a flattering fit. I added an extra inch to the length before starting the cabled panel at front/center and I added the optional short-row shaping for the bust which adds a little more length as well as brings up the v-neck to a slightly shorter length. Both of which will make it acceptable for work-wear.

I anticipate getting the Lia sweater finished by next weekend. The Cabled sweater to 50% by the weekend after that. I'll probably set aside the cabled sweater until March so as to work on some of my smaller projects for a little while.
Posted by Penny at 7:08 AM No comments: