This is the shell/top that I wanted to make out of Caron Simply Soft last month. I found a better 'brown' to go with the paint yarn that I wanted to use. The stripes came out quite interesting. This was a super fast knit! 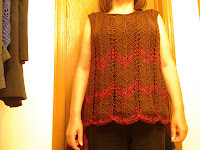 Sweater # 11 - Striped T that I've been working on since the end of May. The ends? A complete nightmare. I tried knitting this three times before and carrying the yarn up the side, but I just couldn't get the edge where the yarns swapped to look right no matter what I tried. I decided to cut the yarns instead so I could 'fix' things when I wove in ends. Yeah. Oh, well. It's 'ok' - I don't 'love' the colors still. I shouldn't have even bothered, but I was having so much trouble finding 'good' yarn that I liked to work with that would work well with summer - and Patons Silk Bamboo is an awesome yarn for summery tops. I couldn't find sweater quantities, first. Then I could only find pastels. Since I bought this yarn and started this top ( and frogged it repeatedly last year )... I have since found some nice, deeper colors (like last month's top). Only those stores now don't carry that yarn anymore either... sigh. But at least I now have three tops out of the yarn I love, even if they aren't all in shades I love.  And - I might have enough for one more top stashed away still... depending on the pattern. 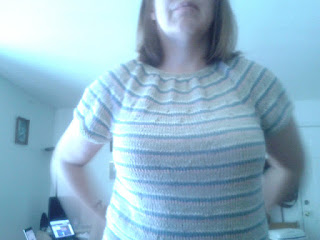 All-in-all - I also don't love the 'gathering' I have at the neckline either. This is a result of a bad decision on my part of altering the pattern to try to keep the neckline 'up' and knowing I was running out of yarn. As it was I ended up using white for the bindoff row (as I had six inches left of the tan after the last garter stitch row). I might end up frogging back to the last tan section and just working the garter stitch and bind off right there with the yarn I frog out.... the only thing keeping me from doing it right now is the fact that I'm still not in love with the colors. So, I am going to see about 'living with it' as-is until next summer and if I think I'll wear it more/like it better with the change - I'll do it. If not, I'm not going to bother.

Masters TKGA Hand Master Knitter Level 1 - I have 14 out of 16 swatches completed (to my satisfaction) and have two swatches and a hat left to make for my submission. My hope is to finish the last two swatches and the hat either this weekend or next (preferably this weekend). And focus on the documentation in August with my goal of submitting it for review at the end of August. I have really struggled with the documentation side of things as while I tried to work on it while working the swatches (per recommendations) ... I just never got off the ground with it (sigh).

Sweater # 12 - Top down, raglan sleeved, white cardigan - covered in cables and dropped stitches. You will only be able to see the cables in the photos I'm posting - because the dropping of the dropped stitches happen near the end. Only about 25% complete (maybe a hair more) so I'd love to really focus on this as soon as I get the TKGA swatches and hat finished. 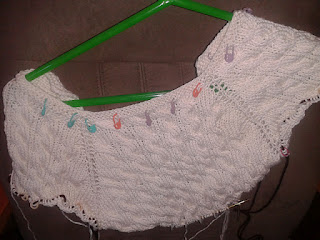 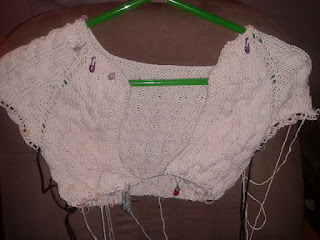 Hat #2 for July  - this is my 'carry around with me' project. I'm going to have a couple of hours a week (if not more) where I can't work on complicated projects... so I might cast on a couple more hats depending on how fast they go.

Planned, but not yet started:

Baby Blanket square - in red and gold for a Gryffindor baby... probably a mosaic pattern for a little bit of interest.

Teddy Bear - not sure yet the yarn, I'm sure I've got lots of options around the house and will go stash diving when I'm a bit further along on the cabled sweater.

AND THEN.... Ravellenics starts toward the end of July and corresponds to the opening and closing ceremonies of the Olympics.  I have ambitious plans for that my dears. So, I really do need to wrap up the majority of my 'other' projects before it starts. I initially plan to do seven hats - one complex hat and six basic, same as every other charity hat I make. Then I plan to do seven washclothes (minimum of about 50 yards each). Then I plan to do as many more basic hats as I can squeeze out before the end of the games... I'm estimating 10, but I'll be happy with less and I'll be happy with more. They'll all just go into my Homeless Shelter Charity pile which is getting quite big.

How could I have forgotton this?

I didn't post that I finished a little dog sweater/costume in June.

My son and his fiance have been talking about buying MY dog a Halloween costume / outfit that she could wear tailgating.... silly Muggles. Why buy when you can make it? 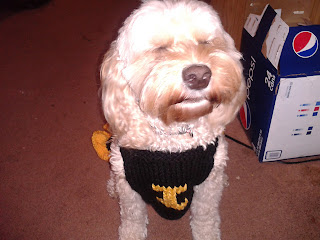 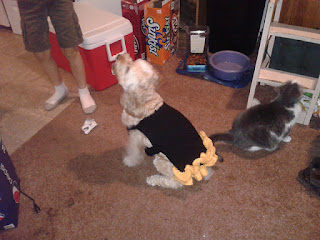 On the Needles with plans to finish during July:

New Projects:
Not a small list. Busy summer month ahead of me. But, I've got three afternoons where I'm taking my son for two hour tutoring sessions (should be prime knitting time) plus four days towards the end of the month with no child at home (which will definitely lead to good knitting time).
Posted by Penny at 9:28 AM No comments: 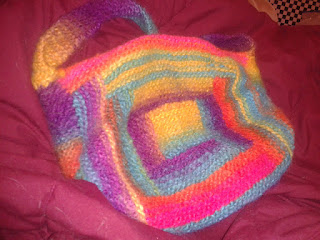 Made with Kaleidescope yarn - very bright and colorful!!! I was going to give this yarn away; but I really, really wanted a felted (colorful!) bag for projects. I ended up breaking out in hives twice due to wool allergies and worked on it only in the evening so I could take benedryl to combat the allergies. I love the color on this tote!

No pics out on the web - sorry! Need to keep this secret until I can gift it at a bridal shower which hasn't even been scheduled yet. But look up PennyIA on Ravelry - and you should be able to find a pic if you're a member (and I know the giftee isn't).

Saving the pic space... it looks pretty darn identical to the last hat; only hot pink.  I was hoping for three more hats and only found time for one. Sadly. But, I've got high hopes for making up my charity hat knitting volumn for Ravelenics!
Posted by Penny at 8:53 AM No comments:

I finished my purple Silk Bamboo Lacy T. I might not have added enough ribbing to the neckline; as it becomes a little revealing every once in a while with the slightly droopy neckline. I am thinking of coming back and adding a row of sc so I can 'scrunch up' the neckline ever-so-slightly.

But it's otherwise quite lovely. (shoddy pics; but a great top) 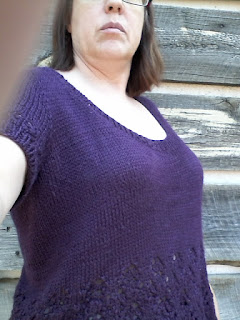 Color is more accurate in the first picture; but I didn't get a very good shot. 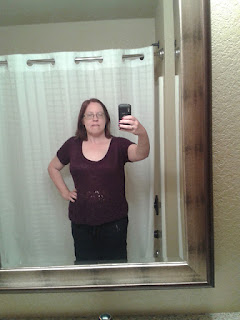 Here you see more of the top; but the color faded slightly.

I will be working on improving my photo skills.